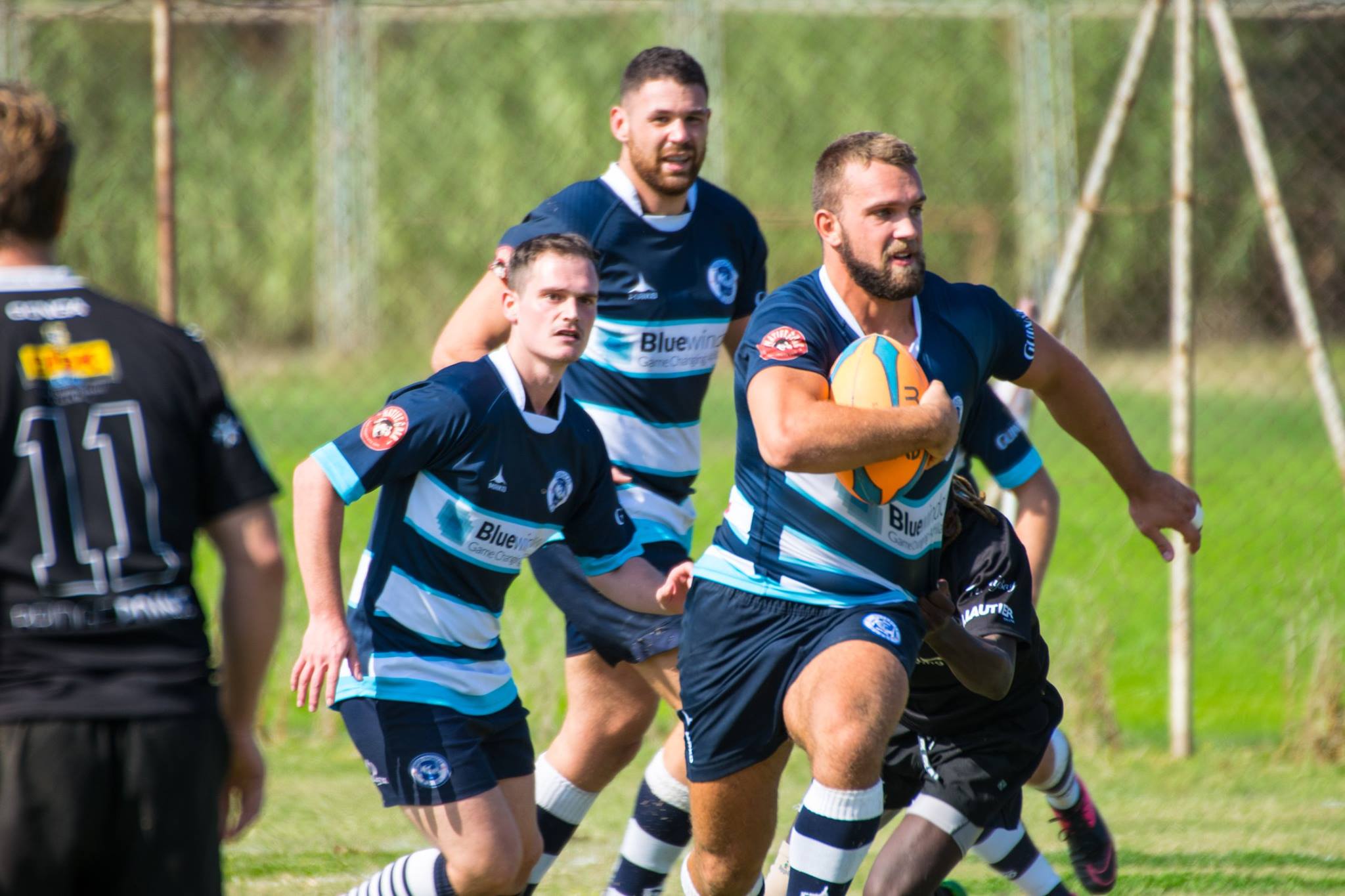 Starting off from where they left off from winning the Ray Elliot Cup last week, Swieqi Overseas were just too strong and organised for a young Kavallieri team trying to find their feet in this seasons’ competition.

From the Kavallieri kick off, that didn’t go the ten metres Overseas continued the pressure throughout the first half with their big runners Harvey(3), Stoker(1) and Clayton Cassar(8) taking the ball over the gainline, scattering would-be Kavallieri defenders in their wake. When your forwards are playing front foot Rugby, the backline has space to exploit and time to create or link to runners out wide and so it was after Overseas had bashed their way at the Kavallieri line, only to be thwarted, they then went wide and Cameron Brown(15) running into the backline scored out wide, after 5 minutes with Dudman’s conversion they now lead 7 to 0.
Chris Briffa(10) and Dudman(12) were kicking into the corners biting off territory and keeping Kavallieri under pressure on their line.

Jean Pierre Zammit(8) and Branton Bonello(4) were battling away trying to get their team into the game but the Overseas defence was resolute. Clayton Cassar(8) scored from a flat pass from Briffa, crashing through three tackles to score after a period of attack, with Roderick Borg(11) featuring in a scintillating run down the touchline.
Overseas 12, Kavallieri 0.

Kavallieri were trying to bring Debierre(11) into the game with wide ball and kick passes to his wing, but the Overseas drift defence wouldn’t give him an inch.

Brendon Dalton(10) ran the ball from his own goal line, with a step and a swerve and took his team deep into Oversea’s territory, but after 8 phases they still could not score and Overseas stole the ball at the tackle and swept downfield.

Clayton Cassar scored again running out wide on the wing, from quick ruck ball through the hands with a Briffa skip pass.
Overseas 17 Kavallieri 0.

The first half finished with Chris Dudman(12) scoring, stepping his way through some weak Kavallieri tackling, a try he converted and then Roderick Borg(11) scoring out wide, outflanking the defence after Harvey(3), Stoker(1) and then Latterade(13) took the ball over the gainline.
Half time score: Overseas 29, Kavallieri 0.

Overseas kicked off the second half, immediately going on the attack after Kavallieri failed to take the kick off and let the ball bounce into touch.
Harvey(3) broke from the ensuing lineout, ran 20 metres, drew the fullback and put his scrum-half Nicky Vella in for a try in the corner. Three minutes into the second half and Overseas were 34 Kavallieri 0.
The Overseas’ scrum was pushing Kavallieri backwards time after time, earning them penalties but mistakes and a committed Kavallieri defence held them at bay to prevent them from scoring.
The Physios were busy with five Kavallieri players going off injured.

Finally from a scrum penalty, Dudman tapped and ran, spinning the ball wide to Borg, then onto Cameron Brown who ran around to score under the posts.
Overseas 39 Kavallieri 0.

Briffa(10) kicked a rolling ball deep into the Kavallieri 22 and from a penalty Overseas again with quick ball moved it wide for Roderick Borg, who was having a good game in both attack and defence to score out wide.
Overseas 48, Kavallieri 0. You would think that by now Kavallieri would be dead and buried, but they kept battling away with a great run by Jean Pierre Zammit(8) taking play into the Overseas 22, then with a number of forward pick and goes finally Patrice Debierre(11) scored next to the posts for Chris Zahra(9) to convert finally putting Kavallieri on the board, Overseas 48, Kavallieri 7.

As the game opened up Matt Caton-Brown(22) on as a replacement weaved his way downfield, he was tackled as he got close to the line, but reached out to score Overseas’ final points, ending the game at Overseas 53, Kavallieri 7.