To start the Overseas 75th anniversary, we are delighted to introduce the world’s leading coach, who has been involved in four World Cup tournaments, reaching the finals in three of them.

He has won numerous awards, including World Coach of the year, and since 2015 he has been the Head Coach for England.

We are very proud and honoured to introduce Mr. Eddie Jones!

Overseas was the first civilian rugby club in Malta and developed the game here, coaching and encouraging local enthusiasts to participate and eventually create their own clubs.

We have an unmatched history and success, and a philosophy of playing in a way which reflects the games traditional values. Each year we welcome new players from around the world as they join the very special Overseas family. Many comment that it is like playing for the Barbarians, which is quite a compliment. 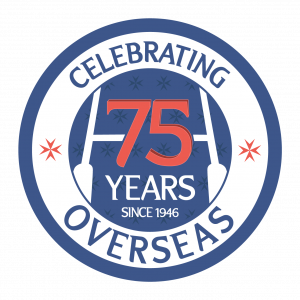 The original Overseas RUFC was formed in November 1946. Although rugby had been played before, the Overseas was the first civilian rugby club in Malta and would compete against British forces sides and visiting teams. For 27 years the club was purely a rugby club, becoming a ‘Rugby and Sports Club’ in 1973.

Following the Forces departure from the islands in the late 1970s, the original club was disbanded. The game was kept alive due to a few enthusiasts who continued to train at Marsa. In 1989, the Overseas was re-formed.

The initial phase of the club and its history is recorded in two books authored by one of it’s original members, Norman Morgan. These also serve as a historical record of the development of the sport on the islands. A copy of the books is available at the National Library of Malta. A scan of the history books can also be downloaded from here:

From 2013/2014, the club officially represents the localities of Swieqi, Madliena and Ibragg. The official team colours of the club are navy blue and white. These are usually represented in hoops.

The shorts may be either navy blue or white.

In line with the club’s philosophy, the flag of the nationality of each player is worn on that player’s shorts in representation of his/her heritage.

The club logo consists of a map of the world shaped in the form of a rugby ball infront of a set of rugby posts. This reflects the international nature and values of the club.

Overseas R.U.F.C is a member club of the Malta Rugby Football Union.

The association promotes pooling of resource, sharing of information and establishment of standards for everyone involved. Its aim is to provide opportunities to anybody interested in different sports, and especially Rugby, Handball and Football.

This applies to different aspects such as coaching, playing and administrative. The association’s goal is also to encourage children and young adults to enroll into the different nurseries at a younger age, and therefore being introduced to sports fundamentals earlier in their lives.